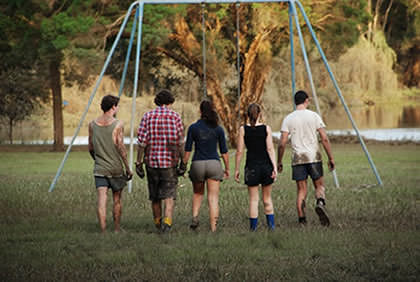 As you probably well know, the past few weeks have been rather upsetting and unsettling for many Queenslanders and Victorians. Devastating floods caused by the climatic phenomenon 'La Nina' descended on 70% of the enormous state of Queensland wreaking havoc on property, land, livestock and fauna. In Brisbane more than 20,000 thousand houses were destroyed by the floods.

Thumbs Up for the Australians who answered to the appeal for volunteers to help those who were affected by the floods. They came by the thousands.

How moving was it to see queues of people on TV with rubber boots, brooms, rakes, wheelbarrows, spades and shovels waiting for buses to be transported to the flood zones.

I have personally been affected; the water reached 1.2m high into our garage and basement and we were without electricity for one week (the lack of electricity and telephone were not half as bad as the lack of the internet!).

Fortunately, the city is now in recovery mode; the clean-up has been difficult but swift, the parks are starting to recover from the ordeal and the building industry will be busy for many months.

Thank you for your kind comments, Helen. If you or anyone else knows of a good game to play on St Patrick's Day I would love to hear from you.
Helen

any suggestions for games other than word games on St Pats day? thanks. Have just renewed. Best value resource around.

I really love your website. I still find it incredulous that this site exists. I know how hard it must be for our Lifestyle teams to keep coming up with ideas and activities and to now have found this site - WOW. I really do think it says a lot about the immense value of community collaboration - because this site is about that! so I am immensely proud that people, especially older people, may be benefitting from this wonderful resource all over the world.

I love your website and activities, it has opened a whole new field for me.