Now's the time to get ready for special events coming up in June!

"Festa della Republica" - the Italian National Day is celebrated on June 2nd. My guess is that most facilities would have some Italian residents who would enjoy observing this date.
There are so many simple ways to celebrate the Italian culture, for instance: ask the Chef to make Spaghetti Bolognese for lunch followed by 'cassata' - delicious Italian ice cream. Play a game of 'Bocce' (a traditional ball sport closely related to bowls) and watch a happy Italian film in the afternoon.

Here is some Italian trivia for your residents: 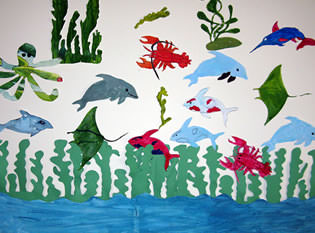 As a result of a United Nations resolution passed in December 2008, World Oceans Day is officially on June 8th annually. It was proposed in 1992 by the Government of Canada at the Earth Summit in Rio de Janeiro. Since then, an increasing number of countries have joined forces to celebrate this special day. Check with your local aquarium, zoo, museum and conservation organizations for special events and activities. This is a great opportunity for all of us to explore our connection with the sea.

Why not turn a wall of your facility into an ocean!
World Oceans Day Poster

Freedom Day or Emancipation Day on June 19th is the oldest African-American holiday observance in the United States. In Galveston, Texas on June 19th 1865, Union Troops arrived with the news that the America Civil War was over and that all slaves in the defeated south were no longer bound to their owners. This led to the Emancipation Proclamation, which declared that slaves from the eleven rebel states were free. This holiday is recognized as a state holiday in 35 states of the United States.

On June 20th we have Father's Day in many countries around the world. Father's Day is celebrated with great enthusiasm all over the world as a day for family reunion, gifts, cards, lunches and luscious breakfasts. Indulge the fathers in your facility with an old fashioned breakfast and a BBQ lunch.

Here are some activities to help you celebrate Father's Day:

Thanks for the hard work you put into making our Jobs a bit simpler....This is such a valuable site for all Diversional Therapists. I can't thank you enough :-)

We are so lucky! I absolutely love everything about Golden Carers, so many things to explore, ideas, etc. Every Tuesday was magic. Thank you again!