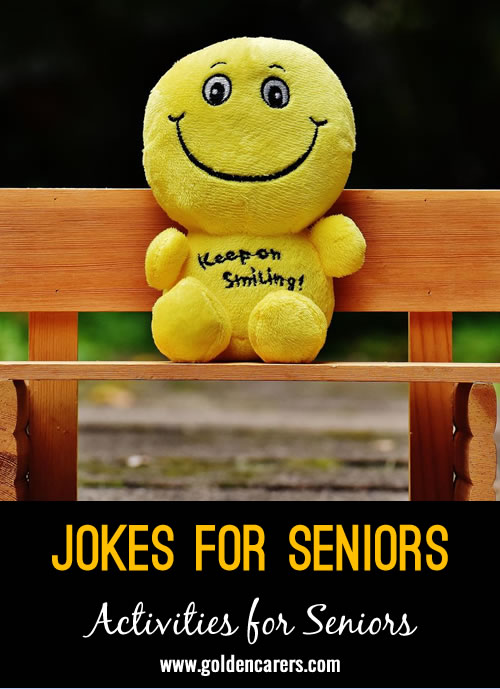 On arriving in heaven a Baptist Minister was given a Holden for his own use. He was happy until he saw the Catholic priest with a BMW.

He complained to St Peter who replied: “The system is fair, he had to give up having a wife and children so he’s entitled to a little luxury in the afterlife.

The Minister understood the justice in it and was quiet until he saw the rabbi with a Rolls Royce.

Back he went to St Peters and said: “He had a wife and children on earth!” to which St Peters replied: “Ah yes, but he’s related to the boss!”

After spending the entire diner correcting my young son’s table manners I turned to my wife and said,“Will the training ever end?”

“A boy’s training never ends,” she replied. “He just marries and this wife gets the job. And please stop talking with food in your mouth.”

When the Joneses were invited to his boss’s house for dinner they took with them their young son. “You must be fond of animals, Mr Beattie” said the young boy to his father’s boss. “Dad says all your money goes on horses, dogs and that bird in the Office!”

There was a strong earthquake that frightened the people of a village so much they decided to send their son little Andrew to stay with relatives in another district.

A day later the parents received this message: “We are returning little Andrew. Send us the earthquake!”

Father: ‘What’s wrong Julie? Usually you talk on the phone for hours. This time you only talked for half an hour. How come?'

Julie: “It was the wrong number”.

The woman got on a bus holding a baby. The bus driver said, “That’s the ugliest baby I’ve ever seen.” In a huff, the woman slammed her fare into the box and took an aisle seat in the rear of the bus.

The man seated next to her noticed she was agitated and asked her what was wrong. "The bus driver insulted me,” she fumed. The man sympathized and said: “Why, he’s a public servant and shouldn’t say things to insult passengers.” “You’re right” she said. “I think I’ll go back up there and give him a piece of my mind.”

‘That’s a good idea” the man said. “Here, let me hold your monkey”.

A man went to the police station wishing to speak with the burglar who had broken into his house the night before. “You’ll get your chance in court,” said the desk Sergeant.

“No, no, no!” said the man. “I want to know how he got into the house without waking my wife. I’ve been trying to do that for years!”

Johnny’s father brought home his boss for dinner.
When Johnny’s mother served the meat, little Johnny asked, “Is this mutton?”
The mother replied: “No. Why do you ask?”
“Because Dad said he was going to bring home a mutton-head for dinner,” Johnny answered.

Teacher:  “What do you call someone who goes on talking when people are no longer listening?”  Student:  “A teacher!”
Teacher:  “Really, Tommy, your handwriting is terrible.  You must learn to write better.” Tommy: “Well, teacher, if I did, you would find fault with my spelling!”

Son: “Dad, will you help me find the least common denominator in this math problem?”Dad:  “Don’t tell me that hasn’t been found, they’ve been looking for it since I was in school!”

“Did you see Mrs Smith’s face when I told her she didn’t look a day older than her daughter?” “ I didn’t notice Mrs Smith, I was too busy watching the expression on her daughter’s face!”

I do a lot of flying in my business.  Sometimes I make three plane trips a week.

I’ve never worried about being so far off the ground except once. That was the time I was riding a two-engine plane and one of the engines went dead.

I asked the pilot if anything was wrong. “Don’t worry”, he said, smiling.  “Everything is fine.” The other motor went dead. “What was that?”  I asked the pilot. He didn’t hear me at first.  He was busy putting on a parachute.  He started for the door. “Hey,” I yelled, “What is going on around here?”

“Stop worrying,” he said, just before he opened the door and jumped.  “I’m going after help.”

A drunk holding a newspaper boards a buys and sits next to a priest. He starts to read the newspaper occasionally swaying towards the priest who was getting very irritated. Then he turns and asks the priest: “Ah… Da..you know what is arthritis?”

The priest replied impatiently in a loud voice:    “It is an illness that affects those who thinks that life is all about drinking, feasting and womanizing. No shame or responsibility.” After a while he felt sorry for the drunk and asked him “Have you had arthritis for a long time?” The drunk replied: ‘I don’t have it. According to the newspaper it is the Pope who has it.”

The teacher asked the class:  “Who can make me a phrase with the word ‘detail’ Little John put his hands up and went to the front of the classroom. He said: “When de rabbit jumps over de fence, de head goes before detail”.

Texas rancher and his wife were arguing while touring Paris. They were hardly speaking to each other after being seated in a fancy French restaurant for supper. When the waiter arrived, the rancher said," I'll have a BIG THICK PORTERHOUSE STEAK."

The waiter replied," Monsieur, what about Ze Mad Cow? "

The rancher said, "She'll have a Salad."

A man feared his wife was not hearing as well as she used to, and he thought she might need a hearing aid. Not quite sure how to approach her, he called the family doctor to discuss the problem. The doctor told him there is a simple informal test the husband could perform to give the doctor a better idea about her hearing loss. "Here's what you do," said the doctor. "Stand about 40 feet away from her and in a normal conversational speaking tone see if she hears you. If not, go to 30 feet, then 20 feet, and so on until you get a response."

That evening, the wife is in the kitchen cooking dinner, and he was in the den. He says to him, "I'm about 40 feet away. Let's see what happens."

Sister Mary, who worked for a home health agency, was out making her rounds visiting homebound patients when she ran out of gas. As luck would have it a gas station was just a block away. She walked to the station to borrow a gas can and buy some gas. The attendant told her the only gas can he owned had been loaned out but she could wait until it was returned. Since the nun was on the way to see a patient, she decided not to wait and walked back to her car.

She looked for something in her car that she could fill with gas and spotted the bedpan she was taking to the patient. Always resourceful she carried the bedpan to the station, filled it with gas, and carried the full bedpan back to her car. As she was pouring the gas into her tank two men watched from across the street.

One of them turned to the other and said, "If it starts, I'm turning Catholic."

28th Feb 2018 Diversions Therapist
We have just had 40 minutes reading some of these jokes it is fantastic to see our residents laugh so long and hard. Thank you I work in mount manganui. Bay of Plenty. New zealand

3rd Mar 2018
Ahh Donna that's so lovely to hear! Thanks for your feedback!
Kymberly

18th Apr 2015 Activities Coordinator
These are very helpful. I try to find a joke every week and they arent easy to find. Thanks, Kym
Shirley

21st May 2012 Recreation Officer
I used these jokes recently, my residents were pleasantly amused
Shirley NSW

Thank you for all your excellent suggestions and resources, what a great site and well worth the annual membership.

I always appreciate your new ideas and suggestions. It certainly helps in the creativity and idea areas immensely. Keep up the great emotional support that you provide!