The Seven Stages of Alzheimer's Disease 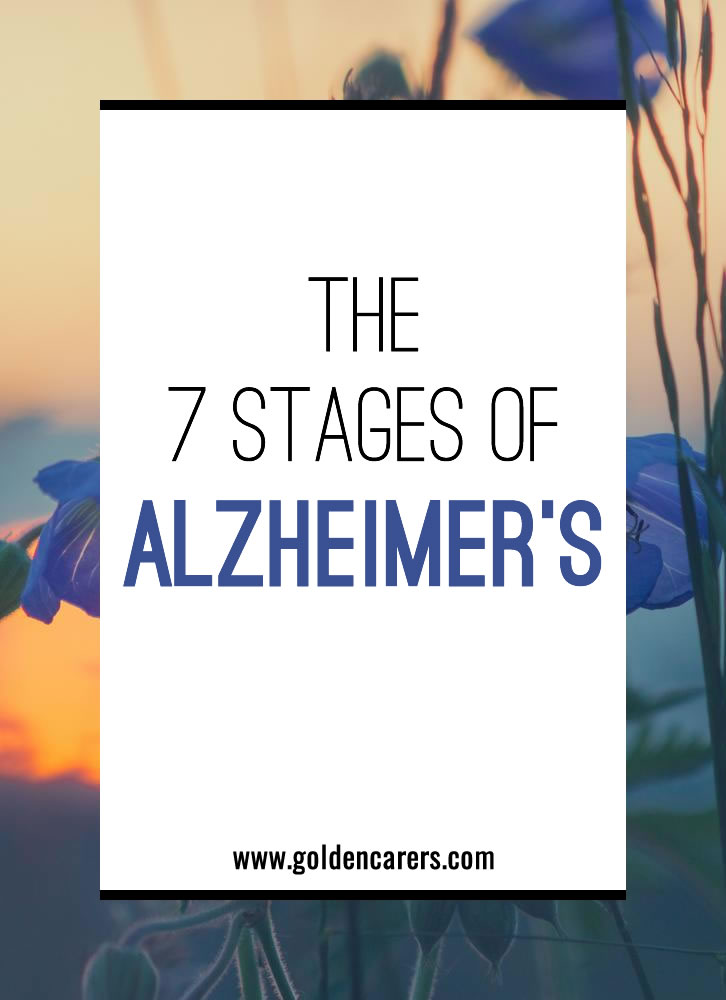 Alzheimer’s is a progressive disease that affects individuals in different ways throughout seven stages.

Understanding the disease progression helps us recognize changes in behavior and provide the right support. Symptoms will gradually worsen over time, however there are ways we can make life better at every stage.

Rarely is a person diagnosed with Alzheimer’s during the first stage of the disease progression. There are few signs or symptoms during this stage, and any memory impairment can easily be explained away by stress or simple human error.

Signs and symptoms are a bit more noticeable during the second stage of Alzheimer’s. It is more common to forget certain words or more easily lose train of thought during this stage. People may experience symptoms like losing personal items or minor memory impairment.

Again many of the symptoms, while noticeable, are still too minor and can be explained away. Someone in Stage Two can also still pass memory tests given by physicians to detect Alzheimer's so a doctor may not even realize it during this stage.

Often it isn’t until stage three of the disease progression before Alzheimer's disease is detected or even suspected by close friends and family of the individual. During phase three prominent signs of mild memory impairment would be:

A physician's memory test can detect mild Memory Impairment during this stage. It is important to note that while a close family may notice the changes in their loved one's behavior, it is common for spouses or family members to make up excuses for their loved one during this stage, which often defers diagnosis until stage four.

Stage Four of Alzheimer’s will cause moderate Memory Impairment for the individual. In addition to memory impairments, the individual will struggle to keep up with their finances and bill paying. Short term memory loss is more significant, and the person may forget what they did the day before or even that morning.

The person’s spouse or family member will start to become their caregiver during phase four. They may need to take on meal prep, billing, and household chores. By stage four a diagnosis has most likely been made by the physician and a treatment plan is in place.

Stage Five Alzheimer’s severely affects a person’s ability to care for themselves. Assistance in activities of daily living is required, for example, help getting dressed, eating, or bathing may all be needed. More severe mood changes will take place during stage five and can cause episodes of extreme anger, depression, or confusion.

Severe Memory impairment may affect a person’s ability to recognize close friends or family members, and their memories may regress to their younger years as they believe that their adult children are once again in grade school or that their parents are still alive.

Stage Five through Seven will more than likely require skilled care by either a family caregiver or a professional caregiver.

Stage Six manifests in a severe decline for an individual living with Alzheimer's Disease, and they will require assistance in multiple aspects of their day-to-day life. Incontinence or bladder control will be impacted, activities of daily living may need full support, and confusion and mood swings are often severe.

It is not uncommon for a person in stage six to lose personal history and may even forget their name. Care during this stage should be focused on the present and the person should not be quizzed on their personal history.

The seventh stage or end-stage of Alzheimer’s disease will require full around-the-clock care for the individual. Loss of motor skills and speech affect the person’s ability to move their bodies independently or speak.

Providing comfort care during this stage is so important. Gentle touch or hand massages, playing soft music, and dimming the lights are all comforting tactile interventions the caregiver can provide during this stage.

The Alzheimer's Association cites that a person can live up to twenty years after a diagnosis but more commonly the life expectancy of the disease is four to eight years after diagnosis.

14th Aug 2021 Activity Director (ADTXCCDP)
What a wonderful article! My Alzheimer residents are my passion. Thank you for sharing
Talita

I love all of your creative ideas! Thank you very much!

I just have to tell you that your word search puzzles are perfect! The right font, print - everything. You even add a little picture on them that adds interest. You've really improved on them and I am eternally grateful. So are my clients!