7 Ways to Celebrate the US Presidential Election 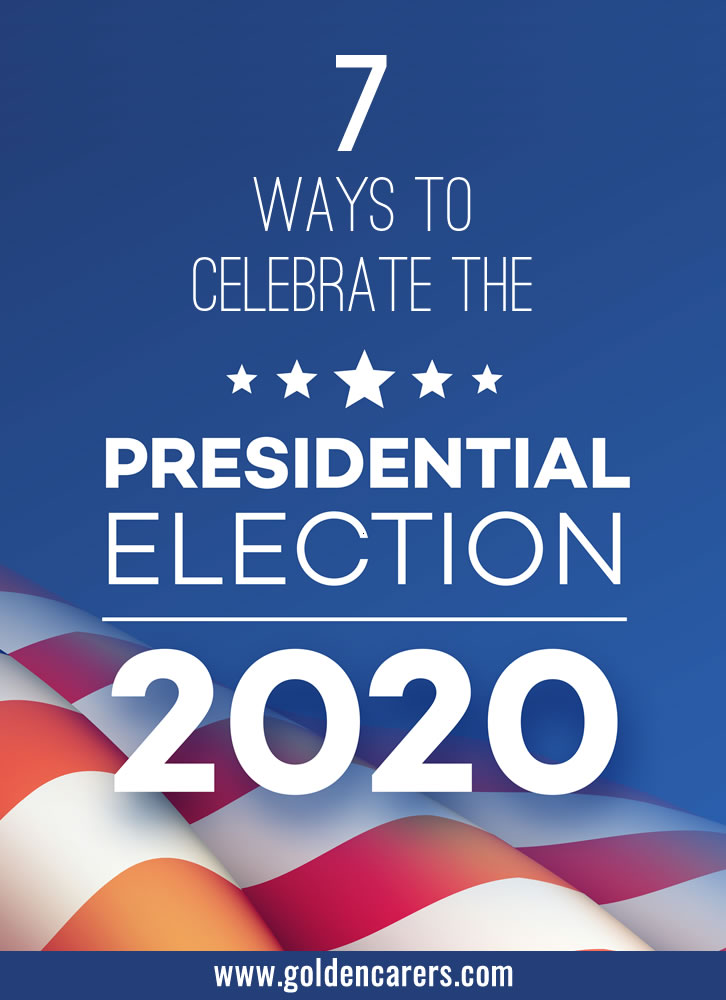 The 2020 United States presidential election is scheduled for November 3. The Covid-19 pandemic has thrown many aspects of the race into uncertainty, making it one of the most unconventional election races in history.

Why not mark the occasion with some fun election themed decorations and activities!

1. Decorate
Decorate the facility with red, white and blue banners.

5. Watch a Reagan Movie
Watch one of ex-President Ronald Reagan’s movies. If possible  get hold of a copy of the only film Reagan and his first lady  did together called: Hellcats of the Navy

7. Have Fun with a Word Search
Give each resident a copy of the Election Wordsearch to complete at their leisure.

1. Ronald Reagan, 2. Only one, Franklin D. Roosevelt served for 12 years , 3. Donald Trump, he was 70 years and 7 months old when he was inaugurated on January 20, 1917, 4. John F. Kennedy, he was 43 years old, 5. Martin Van Bure. He was the 8th President and his first language was Dutch although he was born in Kinderhook, New York., 6. President John Adams and his wife, Abigail, took residence in the White House in 1800., 7. Richard Nixon, 8. Barak Obama, 9. James Buchanan was a bachelor all his life. His niece Harriet Lane was his first lady., 10. Theodore Roosevelt. While hunting at the invitation of the Mississippi Governor Andrew Longino, Roosevelt could not locate a single bear. One of his assistants cornered an older black bear with dogs and tied it to a tree for Roosevelt to shoot. Viewing this as extremely unsportsmanlike, Roosevelt refused to shoot the bear. News spread quickly and a toy maker dedicated a black bear doll to the president named "Teddy's Bear". It was mass-produced and sold worldwide., 11. Four years, 12. Four: Abraham Lincoln (1861 - 1865), James Abram Garfield (1881), William McKinley (1897-1901), and John F. Kennedy (1961-63)., 13. Theodore ‘Teddy’ Roosevelt. He created 150 national forests, 51 federal bird reserves, 5 national parks, and 4 national game preserves , 14. John F. Kennedy, who was 43 years, 236 days, at his inauguration. The youngest person to assume the presidency was Theodore Roosevelt, who, at the age of 42 years, 322 days, succeeded to the office after the assassination of William McKinley., 15. Saxophone, 16. Harry Truman, 17. Air Force One, 18. Jimmy Carter, 19. George W. Bush so far, he lived 94 years and 171 days, 20. The 9th President William Henry Harrison, elected in 1841, died on his 32nd day in office.

How to make a Dream Catcher

This is the most wonderful resource that can be used year in and year out, a great addition for staff when they are planning activities.

This site is an absolute God Send. I cannot thank you enough for the incredible wealth of information you provide. You have saved me hours a week and literally changed my life, I look forward to exploring all you have to offer and think this site is worth every cent, massive thank you to the founders, you can see where your heart is - everything is of an excellent standard and I love the opportunity you have provided for us all to connect and share ideas. Simply Amazing.