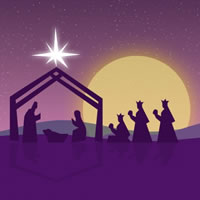 Epiphany is also called the Feast of the Epiphany, the Three Kings’ Day, or the 12th Day of Christmas . It commemorates how a star led the three kings or wise men, to the baby Jesus. Epiphany is one of the three main and oldest festival days of the Christian Church beside Easter and Christmas. Roman Catholics, Lutherans, Anglicans, and other Western churches observe the feast on January 6, while some Eastern Orthodox churches celebrate Epiphany on January 19, since their Christmas Eve falls on January 6.

The festival originated in the Eastern Church, and is called Theophany. It focuses on Jesus' baptism. In the Western church the festival celebrates the visit of the Three Magi to the baby Jesus.

Countries celebrate on the evening before and on the actual day with parades of decorative floats and people in costume as the kings bearing gifts.

Epiphany is known also as the holiday of light, and traditional foods include blood oranges, clementines or tangerines, dried figs, and exotic/spicy cakes, because the Magi came from the Orient. 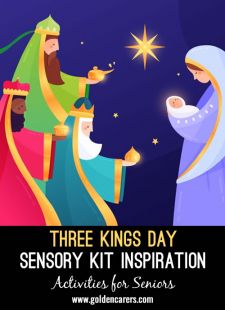 In most Christian cultures, Epiphany marks when the three wisemen arrived to visit Jesus after his birth. You can celebrate Epiphany with a sensory stimulation group or individual activity. Epiphany 1103 0

The Feast of Epiphany may vary from country to country but the story is always the same; this date celebrates the visit of the Wise Men to the infant Jesus. How much do you know about the story? Quiz Epiphany 3404 1
+
Suggest An Activity Idea For
Epiphany

Golden Carers is a wonderful resource. I really like the idea that more of it is going to be in video format as this grabs my participant's attention! Even after 20 years in the activity director role, the ideas in Golden Carers are often refreshingly innovative and really useful, even on the fly. Your help is invaluable! Many thanks!

Golden Carers is definitely right for me! It's very helpful. Thank you so much for your work.