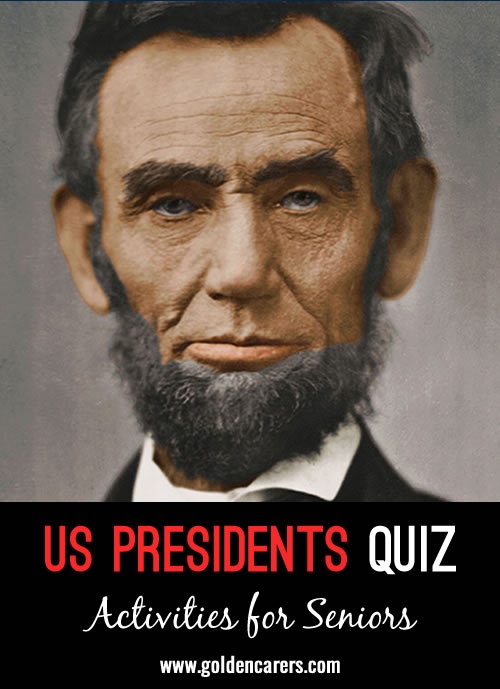 Test your knowledge of Presidents of American presidents!

1. Ronald Reagan, 2. Only one, Franklin D. Roosevelt served for 12 years , 3. Donald Trump, he was 70 years and 7 months old when he was inaugurated on January 20, 1917, 4. John F. Kennedy, he was 43 years old, 5. Martin Van Bure. He was the 8th President and his first language was Dutch although he was born in Kinderhook, New York., 6. President John Adams and his wife, Abigail, took residence in the White House in 1800., 7. Richard Nixon, 8. Barak Obama, 9. James Buchanan was a bachelor all his life. His niece Harriet Lane was his first lady., 10. Theodore Roosevelt. While hunting at the invitation of the Mississippi Governor Andrew Longino, Roosevelt could not locate a single bear. One of his assistants cornered an older black bear with dogs and tied it to a tree for Roosevelt to shoot. Viewing this as extremely unsportsmanlike, Roosevelt refused to shoot the bear. News spread quickly and a toy maker dedicated a black bear doll to the president named "Teddy's Bear". It was mass-produced and sold worldwide., 11. Four years, 12. Four: Abraham Lincoln (1861 - 1865), James Abram Garfield (1881), William McKinley (1897-1901), and John F. Kennedy (1961-63)., 13. Theodore ‘Teddy’ Roosevelt. He created 150 national forests, 51 federal bird reserves, 5 national parks, and 4 national game preserves , 14. John F. Kennedy, who was 43 years, 236 days, at his inauguration. The youngest person to assume the presidency was Theodore Roosevelt, who, at the age of 42 years, 322 days, succeeded to the office after the assassination of William McKinley., 15. Saxophone, 16. Harry Truman, 17. Air Force One, 18. Jimmy Carter, 19. George W. Bush so far, he lived 94 years and 171 days, 20. The 9th President William Henry Harrison, elected in 1841, died on his 32nd day in office.

Flower Leis for a Hawaiian Party

I love the forum, I can get a feel of the issues recreation staff face in their work. Keep up the good work you do for us!!

What a great website....fantastic! Thank you for such great content and recourses