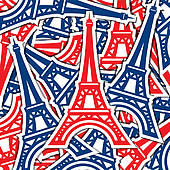 Bastille Day is formally known in France as La fête nationale, and also as ‘Le quatorze juillet’ which means in French 14 of July. In English speaking countries it is known as Bastille Day.

Bastille in French is a jail or prison and it was a fortress prison in Paris, France. It was a symbol of the absolute powers of King Louis XVI, therefore it was hated all over France.

The revolution put an end to the middle ages feudal system as well as to France's absolute monarchy. It changed France's political structure and officially became a holiday in 1880.

On Bastille Day, people enjoy family activities and celebrations. There is also a military parade on the Champs-Elysées. In the evening, there are fireworks and popular dances known as ‘Bal des pompiers’. 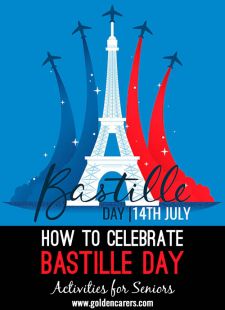 How to Celebrate Bastille Day

The storming of the Bastille on July 14, 1789 began the French Revolution and has been commemorated in France for more than a century. This is a wonderful occasion for a French celebration with residents! France Bastille Day (France) 1535 0

A template of the Eiffell Tower to color! Coloring France Bastille Day (France) 1315 1 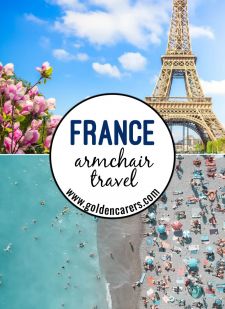 Bunting templates for decoration in the colors of the French flag! France Bastille Day (France) 1689 3

Posters of some of the most famous monuments in France! Posters France Bastille Day (France) 1855 6

The quote attributed to Perignon - "Come quickly, I am tasting the stars!" - is supposedly what Dom Pérignon said when he tasted the first sparkling champagne. France Bastille Day (France) 2968 7

There are many stories about the creation of the French 'croissant', the following is just one of them. France Cooking Bastille Day (France) 4184 11

Here are some suggestions to help you put together your own Vive la France Party! France Theme Days Coloring Bastille Day (France) 7724 14

We really enjoyed ourselves!! This web-site is the BEST. I have set aside the other resources at my facility since I discovered Golden Cares. I am so thankful for all the work that has gone into this site. It makes my life as a recreation coordinator enjoyable. Thank you

I love Golden Carers! When I first became an ‘Activity Aide’ I spent hours scouring the internet looking for meaningful activities for elders experiencing cognitive decline. I finally found ‘Golden Carers’! I’ve passed along ’the find’ to the Activity Director of where I work. Thank you again for all that you do - Golden Carers is much more than a great resource for activities - it’s an education on how to provide ‘life’ to both workers and our elders.