Guessing Game - Who Am I?

Found In: ›Activities ›Reminiscing ›Alzheimer's & Dementia ›Games ›Who Am I ›DIY Activities 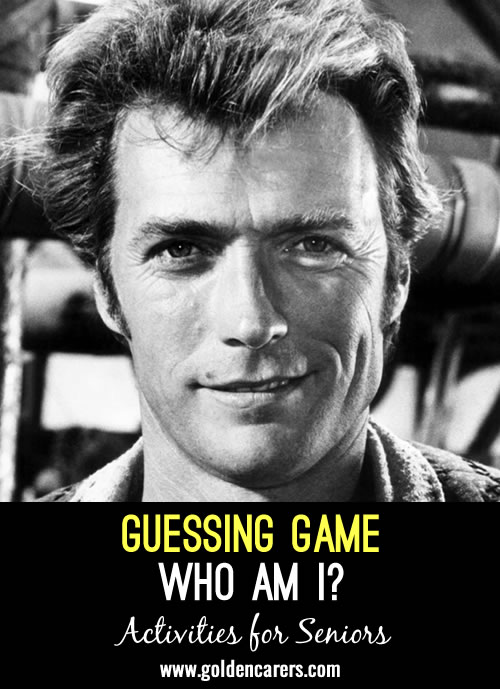 This is a wonderful reminiscing activity in a group setting. Guess the names of these famous people from the clues provided.

Extend the activity by asking residents who else was famous in their time and reminiscing together.

Search the internet for black and white pictures of famous people that your residents will relate to. To find photos, simply Google the name of the famous person you want and select 'images'.  For example:

Make sure you look for people relevant to your clients. For instance, if your facility is multicultural, look for famous people from the countries they come from.

Guessing Game - Who Am I?

Want to create your own version?

25th Feb 2020
A new series of WHO AM I profiles are released each month, to celebrate the birthdays of famous people. https://www.goldencarers.com/who-am-i/
Christy

25th Feb 2020
Thanks so much for your feedback Christy!
Claire

19th Sep 2019
This went down so well! Can we have more of these please?
Talita

22nd Sep 2009 diversional therapist
Another game is armchair travel where you have an Aussie atlas and start the tour from your town, describe which direction eg Nth East and what the town is famous for, use this to prompt to reminiscence about travel & use poetry of Aussie towns to stimulate discussion- great vision impaired exercises - Cheers Sandi
Helen 22nd Jan 2009
why not have a set of verbal clues, for example play a song that the famous person sang or read a quote from a speech they made?
Rose Rice

8th Jan 2008 Diversional Therapist
what about clients with vision impairment in doing these activities can u suggest any.

This website is such a great hit! I look forward to many enjoyable months ahead. Your site is absolutely amazing! I use it all the time.

We have been a member of Golden Carers for the past 5 years and honestly, it makes our lives here both easier and more interesting!!! The hours it saves us when planning activities for our residents result in delivering quality activities. Our residents love the word searches and crosswords and the armchair travels have brought happy memories of holidays. Thank you for all you do!