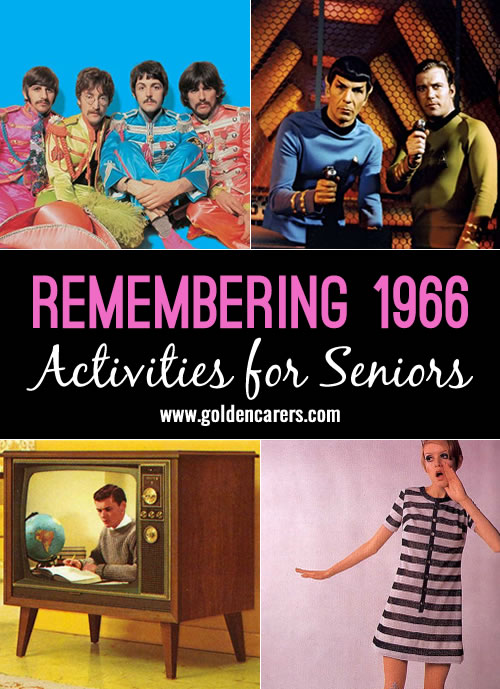 Let's reminisce about what was happening in the world 53 years ago.

Discover more interesting anecdotes that your clients remember and add to the list below.

Ask clients if they remember the singers of these songs.

9th Nov 2016
Great resource. Can I add decimal currency was introduced to Australia in February 1966?
Solange

10th Nov 2016 Diversional Therapist
Hi Julie, thank you for your input. We will add it to the article. Best wishes!
Peter

8th Nov 2016 Recreation & Lifestyle Coordinator
Another memorable T.V. event from 1966 was the first episode of 'Play School' on the ABC July 18th
And in sport - St Kilda one it's only VFL/AFL Grand Final defeating Collingwood by 1 point.
Solange

8th Nov 2016 AIN
Hi, it was the Rolling Stones who toured in 1966. The Beatles toured Australia in 1964, the same year my family emigrated from Scotland. It was the only way my parents could get my then 12 year old brother to agree to leave Scotland :-)
Solange

8th Nov 2016 Diversional Therapist
Hi Chris, What a lovely family story; thank you for sharing. We have rectified the article, we appreciate your feedback.

"I love this site, thank you so much for making my job a little easier :)"

You're quite the special angel here to assist everyone. It takes a special kind of person to deal with seniors - they are not given the respect or credit they so deserve to have lasted this long on this earth. To have witnessed such history is amazing. So many are forgotten about and I try everyday to share RAOKs (Random Acts of Kindness) with any person I see that could use it - thank you again for the great ideas which I hope to spread around the area to help make others know how special they are.