How to write Progress Notes 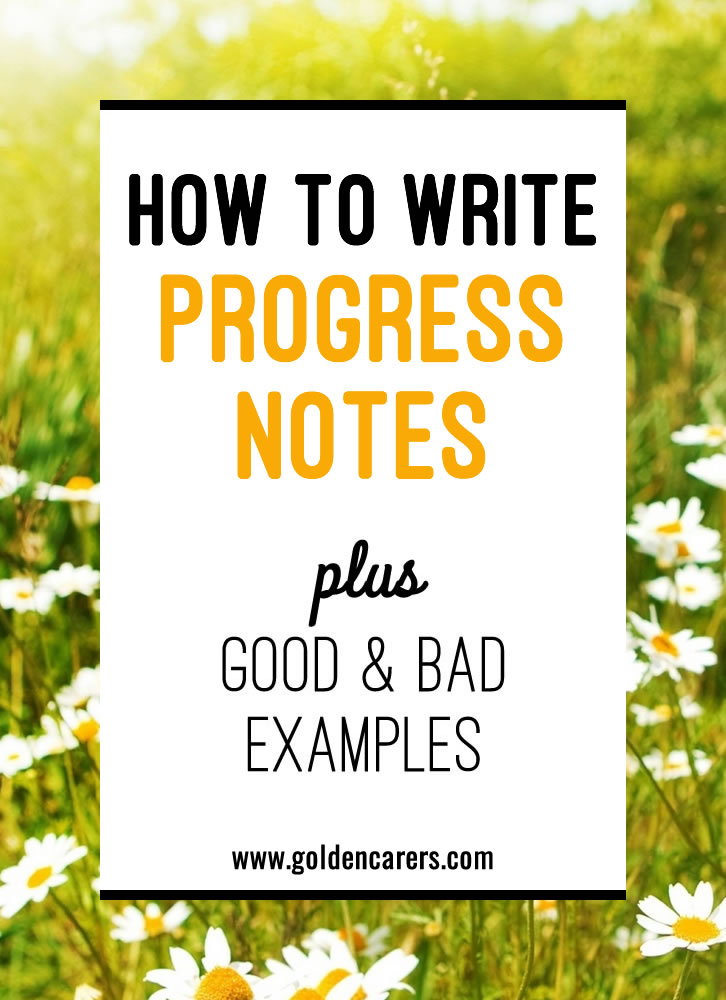 Progress Notes are brief narrative entries written to record negative and positive events relating to residents. They are also used to record situations regarded as irregular, and residents’ response to lifestyle issues.

Progress Notes are written to supplement care documentation so that the quality of care can be continuously improved. They enable staff to re-assess the needs of residents, make changes to their Social Profiles and seek appropriate interventions for Care Plans.

What should be recorded as a Progress Note?

Progress Notes can encompass many facets of residents’ lives:

How to record Progress Notes

Be Objective and Brief

To be effective, Progress Notes must be objective: you must report information that is measurable. You should record situations that you have witnessed or initiated. Subjective documentation is not recommended as it cannot be evaluated. Subjective entries are those which reflect your opinions or assumptions.

It is also important to keep Progress Notes short; they should be a simplified version of what occured.

Integrated Progress Notes indicate continuity of care from a multidisciplinary team of health and care staff.

Staff were escorting Mrs Bow to the dining room when she saw Mrs Allen wearing a yellow cardigan. Mrs Bow started weeping, saying repeatedly: ‘it is my cardigan’. She then insisted on going back to her room and refused to eat. Staff established that the cardigan had no name tag.

Mrs Bow was visibly upset when she assumed Mrs Allen was wearing her cardigan, a fact that could not be verified by staff as there was no name tag. Mrs Bow declined lunch after the incident.

This evening I was passing by the dining room when I saw the RN administering medication to Mr Casals. However, as soon as the RN turned her back Mr Casals spit his tablets out into his hands and placed them quickly in his pocket. I went and found the RN to inform her.

At lunch time I observed Mr Casals taking tablets from his mouth and placing them in his pockets. RN informed.

Sitting in the recreation room, Mr Tiller became very agitated and red in the face and used abusive language towards Mr Sims when he saw him walking away with his walker. Staff told Mr Sims that the walker did not belong to him and he returned it.

Mr Tiller became distressed and used improper language when Mr Sims mistakenly took his walking aid. He settled down after it was returned.

I escorted Mrs Jenny Ho to the toilet but when we got there it was occupied by Mr Gill. He stayed there too long and Jenny couldn’t hold on anymore and wet herself. Staff took her back to her bedroom so she could change her clothes.

What’s wrong with this information?
“Stayed too long” - compared to what? When was a time limit set up to go to the toilet? By whom? “Wet herself” - How do you know? Maybe Jenny has an ‘UTI’ (urinary tract infection). Maybe she drank too much liquid. How about this:

Staff escorted Jenny Ho to toilet but she didn’t make it. Jenny was escorted away to be attended to.

Ivy was waiting for her lunch when she started calling; “nurse, nurse”. Lindy, sitting nearby showed Ivy her walking stick and shouted out that she would bash her over the head if she didn’t shut up.

Linda’s name was placed on the list for the bus outing “Fish & Chips on the Bay” by her relatives. When we got there Linda wouldn’t stay seated, walking away all the time without her walking stick. Staff had to be with her the whole time afraid she would fall and break a leg. The problem was that the other staff had to look after another 6 residents on their own. It was very hard and staff agreed that Linda should not come on bus trips anymore.

Linda went on the bus trip but became non-compliant with her walking aid. One-to-one attention was necessary for safety reasons. Linda’s relatives will be invited to join bus outings in the future.

This morning at the gardening activity John called Bill ‘names’ and wheeled himself towards him to hit him. Bill was furious and did the same waving a small shovel in the air threatening to ‘kill’ John. When staff asked what the problem was John said Bill had ‘pinched’ his shovel but Bill said John had taken all the planting pots and left him with none. Staff sat them on opposite ends of the table and kept an eye on them for the remainder of the session.

At the gardening session this morning staff had to separate John and Bill as they exchanged expletives and threatened each other. The reason for the altercation was not established.

This morning Denia asked staff to take her home because her mother was waiting for her. She was holding two shopping bags full of clothes and an umbrella. Staff tried to tell her that she should wait until her family came to take her but she wouldn’t listen. She started to cry and walked the in the direction of the front door. She said her mother would be terribly worried if she didn’t come home. Staff had to call for assistance to take her back to her room.

Denia was delusional and rather distressed this morning, crying and packing her clothes. Staff spent extra time with her to console and reassure her.

Martin was very difficult this afternoon asking staff to put more sugar in his coffee. Staff explained to him that three ‘splenda’ (artificial sugar) was what he usually took because he is a diabetic. He said he wanted more and shouted abuse at staff. Staff had to go and ask the RN for permission and the RN said staff could give him one more sugar.

This afternoon Martin became enraged and used improper language with staff saying that his drink didn’t have enough sugar. Staff consulted the RN and Martin was given extra sugar.

This morning Jean was sitting on the table for craft when staff noticed that Irene came from behind and took Jean’s handbag. Staff tried to rescue the handbag before Jean noticed it but it was too late; Jean called Irene a ‘thief’ and demanded her handbag back. Irene was persuaded to give back the handbag when staff presented her with another one.

Myrtle was agitated and upset with the hairdresser because her name was not on the list for a hair-set. The hairdresser explained to Myrtle she had her hair set only fortnightly but Myrtle didn’t want to hear it, she wanted her hair set. Myrtle was making a scene and staff had to remove her from the hair salon. Staff consulted the RN who suggested a phone call to Myrtle’s family to ask for permission to have her hair set again. This was done and peace restored.

Myrtle was confused thinking her hair appointment was today. She became distressed and at the RN’s suggestion Myrtle’s family was consulted and she had her hair set which made her very happy.

Where to Find Continuing Education Opportunities

How to Communicate with Body Language

How to be Culturally Sensitive in Senior Care 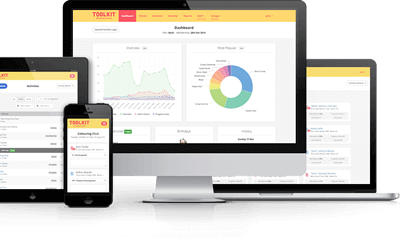 28th Aug 2021 Project Officer
This is an absolutely brilliant resource! Thank you. Love this site!

3rd Sep 2021
Thanks so much for your feedback Meg!
Sam 24th Jun 2021
Need advice, on one of my ND shifts a resident was restless and could not settle.
Resident stated they had no pain and nothing was wrong just couldn't sleep.
I did not inform RN as this is this residents usual habit. I progressed noted the restlessness. RN stated that I should of reported to her as I made her look like that she wasn't doing her job properly. Also that I should not of used the word restless as that is a very strong word. I realise now that I should of informed RN but I do not think my choice of discription was wrong.

13th Jun 2021 Assistance In Nursing
I would like to asked a favour how to write progress notes , as a second language its hard for me to put the right sentence , after all hard work for all practical activities i have provided to the residents for day and my brain gone blank what to put into the progress note . thx

17th Jun 2021
Hi Virginia, I hope you can use some of the examples in this article to help you. I'm sure it is hard when english is not your first language. Remember to be short and to the point when describing events and use objective language - you are trying to just say in a clear way what happened. All the best. Here are some more tips:

15th Feb 2018 Diversional Therapist
Hi Pat, progress notes are a succinct summary of relevant facts occurred to clients on your shift. For instance, if support for a client is increased, due to health deterioration, you should write what support was provided and how the client managed (mood). Stick to essential information you have observed and report what client says oo/and feels. Write events in an objective, respectful, and non-judgmental manner; refrain from using words like: uncooperative, abusive, hysterical, but if you need adverbs have them accompanied by an explanation/clarification of the circumstances. The significance of Progress Notes depends on following the guidelines and your choice of words.
Melissa 14th Feb 2018 HCP Coordinator
Progress notes are an ongoing struggle for all, this is a great little refresher. Thanks!

17th Feb 2018
Thanks for your feedback Melissa!
Wendy 16th Aug 2017 Residential & Community Care Coordinator - North Midlands
Progress notes are challenging and I believe we all need education on that especially in care plans where they are Patient centred, and getting all staff involved.
Rhonda

I've just joined today ... I can see already that I've made the right choice. The information and ideas are fantastic!