5 Myths and Misconceptions About Dementia 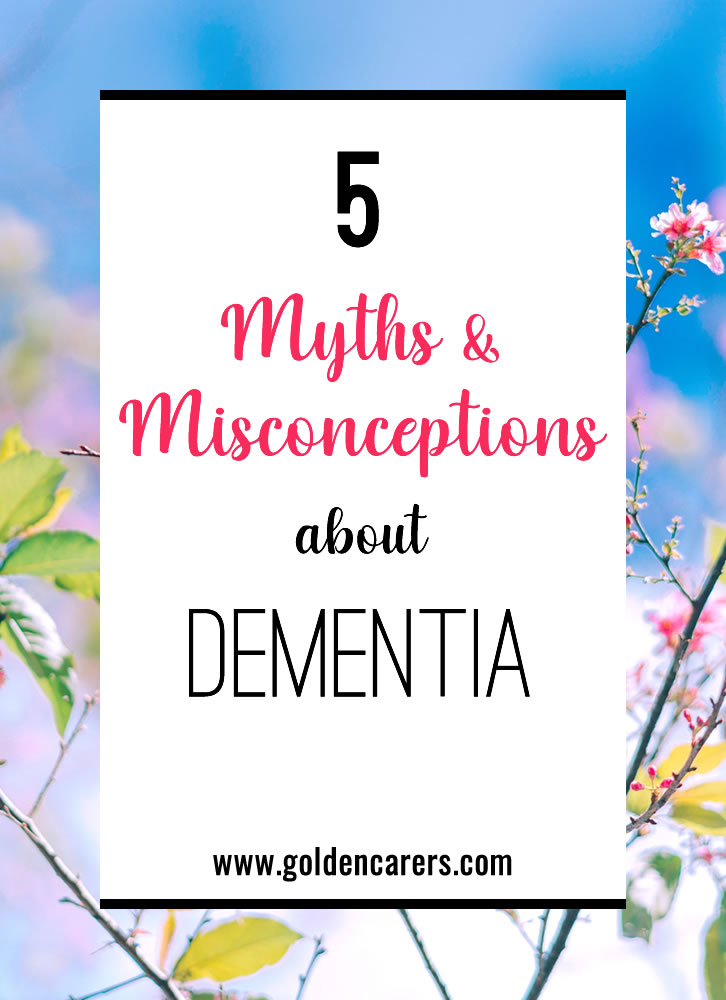 Dementia is a complex term that is often given as a general diagnosis for any decline in a person's cognitive ability. Dementia is not a disease, but rather a group of symptoms that associate to memory loss and cognitive decline.

Because so many people in care homes have dementia, many will assume that all the residents in need of care have dementia. However, this is not always the case, and leads to several common myths and misconceptions about dementia.

1. Misconception: Dementia is the same thing as Alzheimer's disease

Dementia is not a disease but rather a group of symptoms and Alzheimer's is categorized as a disease. A good way to separate the two is to say, "Alzheimer's disease or other forms of dementia."

2. Myth: Everyone has the same type of dementia

Since Dementia is commonly the only diagnosis seen listed in a resident's chart, it is assumed that everyone with dementia has the same symptoms or the same type of dementia. This is far from the truth and in fact, symptoms of dementia are unique to each resident.

The most common types of dementia are:

Each of these diagnosis's have their own distinct set of needs. Approaches to the way we deliver care will require adjustment based on individual assessment.

3. Myth: All older adults have dementia

Old age has several of its own set of myths and misconceptions, one of them being that everyone that grows old will lose their memory.

Popular phrases like, "I'm having a senior moment" or "You can't teach an old dog new tricks" promote offensive stereotypes of what it means to grow old and have left many people thinking that dementia symptoms are a normal part of aging.

Older adults who require assistance in their Activities of Daily Living (ADLs) are sometimes referenced as being a lot like children. Even if we can find similarities in the provision of care, it doesn't mean that residents should be treated like children.

One way to alter this perception is to change the words we use. For instance, at mealtimes, residents who need assistance in feeding are regularly told to put on their bibs. Instead of using the word bibs, closely associated with a feeding tool for babies, reference them as ‘clothing protectors'.

As Activity Professionals, it is important that no matter the functioning level of the resident, we provide them with activities that are respectful and that are dignified. Coloring is a popular activity for residents, which offers several benefits like reducing stress. Choosing age-appropriate images is important in this activity.

5. Misconception: People with dementia can't speak for themselves

Have you ever noticed a family member or staff person talk about or answer for a resident while they are sitting right there?

Not every resident can answer for themselves, and those who can't will, of course, need assistance in communicating. However, what often ends up happening, particularly to residents who are further along in their dementia, is that people will begin to speak for them.

While this comes from a good place, it can quickly take the independence away from the resident. Even residents with advanced dementia can often make decisions if we change our approach to communication and give them more opportunities to understand what we are asking.

Making decisions or speaking for them might make everything easier, but it does take away from their autonomy, Where possible, all residents should be given the chance to speak for themselves.

Food Safety Considerations for the Elderly

3 Ways to Practise Mindfulness with the Elderly

How to Setup Up an Orientation Program for New Activity Staff

Joe 26th Jun 2020
Thank you Molly for the informative post.
Where I come from some care workers need this education otherwise it is a big problem rendering care. Dementia is generally associated with all old people here, this should not be the case though. The cause of this in my opinion is lack of skills development from facility management to regular care workers. Because of the variety of diagnosis of clients in one facility, those not in management or higher in nursing care hierarchy will be ignorant and sometimes indifferent to this important aspect of the work.

I'll gladly share to relieve the pain it causes seeing elderly/client abuse because of ignorance and indifference.

May God bless all those actively participating to help a fellow in need.

18th May 2018 Carer
Thank you for sharing your knowledge to all of Us :) it is very useful information to use to empower the lives and wellbeing of our client's that having Dementia! God Bless you and more power :)

22nd May 2018 Activity Professional & Writer
Thank you, Milyn. Yes, I completely agree that through understanding we all can empower the lives of our clients. I think you say that beautifully!

16th May 2018 Activity Professional & Writer
Thank you, Bradley. I'm so happy to hear you will be sharing!
kay

16th May 2018 Activity Professional & Writer
Thank you, Kay! So glad this will be helpful.
Cheryl

16th May 2018 Activity Professional & Writer
Right on, Cheryl! Even for those who understand its good to have a reminder now and then. Thanks for your comment!
Elizabeth

15th May 2018 Recreation Officer/AIN
Thank u for this information about Dementia. I will share this in our workplace. We can all learn from it

16th May 2018 Activity Professional & Writer
Thank you, Elizabeth! Thrilled you will be sharing the information with your community.

16th May 2018 Activity Professional & Writer
So glad you found this helpful, Mia! Thank you.

14th May 2018 Activity Professional & Writer
Molly has submitted a new article: 5 Myths And Misconceptions About Dementia

I have been in this field for close to 15 years. I came across your website initially because I was searching for a shared, personal forum with other professionals in my field that was not attached to random advertising and monthly fees. After discovering your website which hosted a forum that was exactly what I was looking for, as well as providing a mountain of resources that didn’t require you to follow several external links to get to, and to top it off no monthly recurring fee...Jackpot!

Thank you very much to Golden Carers for creating such an informative website. You have assisted me and my colleagues in developing a fun and engaging activities programme that is meaningful and interesting for our Bristol Care Homes residents. You are also our plan B in the event that plan A does not go as planned. We strongly advise all activity workers to join you.