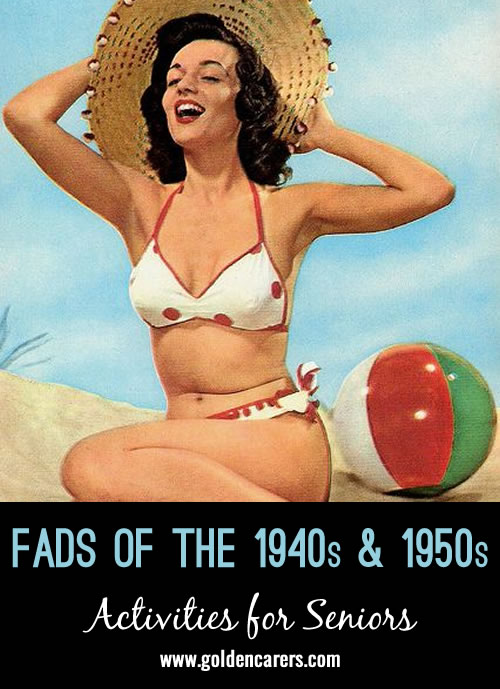 The 1940s and 1950s were decades of profound and lasting cultural change. There was plenty of trauma and upheaval but in this this article we concentrate on what was good and fun!

Reminisce about the hobbies, mania, fashion, sports, and other frivolities of those years. Some of the fads are still around today! Ask clients to add to this list.

Despite elements of rock and roll first being heard in 1930s music, the genre acquired its name in 1954. Beyond simply a music style, rock and roll influenced lifestyle, fashion and attitudes. Poodle skirts and bobby sox became fashionable and new and energetic dance styles like the Jive emerged.

Sideburns were originally known as 'burnsides', named after Ambrose Burnside - an American General of the nineteenth century - known for his unusual facial hairstyle that connected thick sideburns by way of a moustache. In the 1950s, sideburns gained popularity with young men who rejected the clean shaven culture. Marlon Brando, Elvis Presley and James Dean helped spur the comeback.

What goes around comes around! Hula-Hoops invaded playgrounds and took the world by storm in the late 1950s. Thanks to a great marketing campaign, 25 million hoops were sold in a few months. These toys are still popular today and are now even used in adult fitness classes!

Ant farms were popular in the 1950s! The 'farm' would be made from a glass or clear plastic container, some dirt or sand, a few dozen ants and some food. People of all ages had fun watching the ants make 'inroads' inside the farm.

The modern bikini was first unveiled in 1946 in France. Louis Reard introduced his design four days after the United States had begun atomic testing in the Bikini Atoll. In a rather bold marketing ploy, Reard named his creation le bikini, implying it was as momentous an invention as the new bomb!

Chewing some kind of natural resin dates back thousands of years across many cultures. During World War II, gum featured in every soldier's meal rations. Gum advertisements displayed patriotic imagery and messages to boost morale and sales increased dramatically.

Can you believe that American billionaire Howard Hughes designed the first conical bra? He was inspired by film star Jane Russell's breasts when the film The Outlaw was being made. He employed his engineering skills to design the cantilevered underwire bra to emphasize her assets!

Boomerangs originated in Australia, as a weapon used by Indigenous Australians for hunting. As a toy, they were popularized in the late 1950s in the United States and then spread to many parts of the world.

Bermuda shorts were once the uniform of British soldiers in Bermuda!! Tourists loved them, and they became the most popular summer wear of the 50s.

Drive-in theaters started in the 1930s but the public embraced them in the late forties and fifties. They appealed to families and young people wishing for extra privacy on date nights!

This ancient game had its Golden Age in the early Fifties when professional bowlers earned salaries to rival that of football and hockey players. With the advent of automatic pin setting machinery the popularity of the sport exploded. Ten-pin bowling was shortlisted for inclusion in the 2020 Olympics, but missed out.

Despite dating back to the 1890s, jukeboxes were immensely popular in the Forties through Fifties. They were an important source of income for record companies. Their decline was due to the portable radio and later the cassette tape deck.

We'd love to hear your feedback! What other fads can you add to the list! 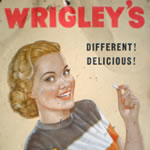 Never Have I Ever Game for Seniors

24th Mar 2022 Care Home Manager
We have a lovely new Activity Co-Ordinator 'Hope' and she is thrilled with this site as it is making her role so much easier. This is one of my favourite activities to do with our residents as when that music plays, you can see their eyes light up and remember their first slow dance, their first jive, their first kiss. The ladies talk about the excitement of getting ready to go out on a weekend and meet that 'certain boy'. Absolutely brilliant fun , thank you :)

We have sourced some old posters and postcards from ebay which really helps with the session.
Elizabeth

22nd Oct 2020 Manager Of Recreation And Volunteers
Thank you so much Golden cares,the resident enjoy all the activities ,we have so much fun doing it, make my work so much enjoyable getting all the new activities every time.
Thank you!!!

25th Oct 2020
Thank you so very much for your feedback Elizabeth!
Shaquira

4th Oct 2020
Thanks for your feedback Shaquira!
Marnee

28th Oct 2018 Transpersonal Art Therapist
The residents loved this exercise week before last, lots of sharing, laughing and new information came to light about their passions in life. This week based on this information we did an art activity which they thoroughly enjoyed. Thank you Golden Carers for all the amazing activities it does make things easier and is stimulating and uplifting.

29th Oct 2018
Thanks so much for your feedback Marnee, it means so much to us!
Diane

25th Feb 2018 Activity Director
I would have loved the extra addition of photos for those who need visuals to stimulate memory. Thank you for the discussion though. If anyone completed the lesson using photos, please post them. Thanks!

29th Oct 2018
Hi Diane, that's a nice idea, we will organise some photos to go with the activity!

22nd Feb 2018 Senior carer
Thank you so much to Goldencareres !! We had great time doing this activity today. Residents were so excited to talk about those days. Between our discussion I played related songs rock n roll ...yellow polka dot bikini .. :) you made my job so loving, love you Goldencarers !!

22nd Feb 2018 Diversional Therapist
Hi Geeta, thank you very much for your kind words. We so much appreciate your feedback. We are glad this activity worked for you and that you extended it with music. Well done!

You have the best activity and recreation site out in the world. I use about 4 sites, and yours is always the best! I can always find the best from your site.

Thank you for such great content and resources. Something for every occasion. I really love using this website.