How to host an Olympic Games Theme Day 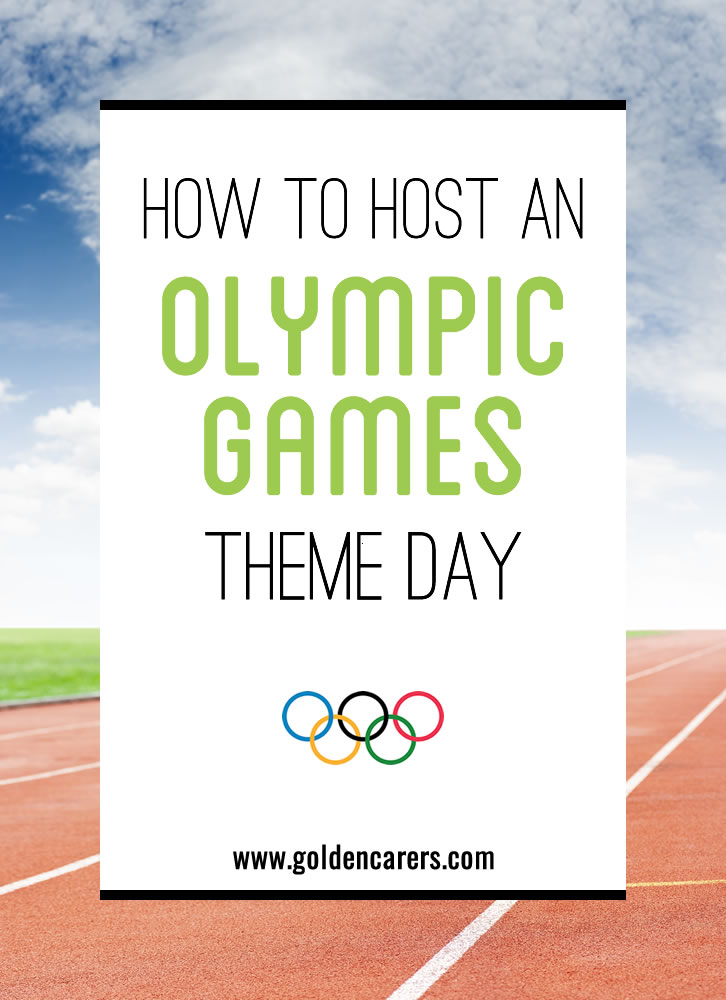 The Olympics provide a wonderful opportunity to make your facility buzz with excitement!

The Games showcase the World’s top athletes competing for national pride as well as the cultural history of the host country with a spirit of solidarity and friendship.

Allow the thrill of the Olympic Games to transform your facility for a few days. A little planning and lots of preparation is needed so gather as many 'helpers' as possible to enable you to get off to a good start.

It goes without saying that the games on your Program should be according to the capabilities and resilience of your participants. Start preparations a couple of weeks before the event and make it a family friendly Olympics!

Now is the time to start planning your own in-house Olympics. Watching favorite sports on TV can be enthralling but getting involved is even more fun. In the true spirit of the Olympic Games, plan your own mini Olympics! Plan daily sports events related to the games.

Here are some ideas for you to build on:

Facilities that cultivate an atmosphere of teamwork are bound to offer better care to their residents. Invite nurses, gardeners, and kitchen staff, and engage them in the festivities to boost the fun and laughter. Ask residents to judge the games!

Ask two staff members to race each other in a “Backwards Race”.

Amuse your residents by lining up two groups of staff to play a Tug of War.

Have a couple of staff members participate in an 'Egg Race'. The game is simply running or walking fast, carrying a boiled egg on a spoon to a specified location. Only one hand is allowed to hold the spoon. Whoever finishes the race first with the egg still on the spoon is the winner.

Balloon between the Knees Race

Find some willing staff to have this race, it is quite hilarious. Blow up a balloon to a size slightly smaller than a soccer ball. Place it between the knees and try to walk or run to a specified location.

Make sure competition is not the focus of games; participation and fun should be the main feature.

... And Even More Game Ideas

Olive crowns made from olive tree leaves were awarded to winners when the Olympics first began in 776 BC! Make some Olympic paper crowns (unless you have access to olive trees!) to offer the audience.

There are several ways to make the rings:

Great for cheering and exercise gross motor skills. They are inexpensive and fun to make.

We'd love to hear your feedback!
How will you be celebrating the Olympic Games?

thara 25th Mar 2022
We did a mini Olympics competition the week before Halloween. I had a obstacle course ready, and then we did some running competitions. Other events included egg and spoon race, a free archery display/contest and a fast paced football test of skill, plus a short hula hoop lesson.
Contestants who were taking part in the sporting events were evaluated on their skill, ability etc. Next time I surely hope to include some more events like badminton and athletics as a part of the entire event schedule. Medals and prizes were only awarded to the kids at the very end of the last day. It was a whole five day event spread out over a week. We had tea then the young pupils went off home in order to rest up for tomorrow’s activities.
Christine Marie 20th Jan 2022
This is perfect! Exactly what I was looking for! Awesome and fun activities. The kids will have a blast!

23rd Jan 2022
Thanks so much for your feedback Christine!
Deanna 20th Jun 2018
Thank you! These activities are great. I will use them with my summer camp for Olympics Day.

25th Jun 2018
Thanks for your feedback Deanna!
Matylda

14th Mar 2018 DT
Thanks Golden Carers Team for your inspirations ,so many ideas and quizes we love them

14th Mar 2018 Diversional Therapist
Hi Matylda, thank you for your kind words. All the best!

23rd Jan 2018 Activity Director
These are such wonderful ideas! Thank you so much.

23rd Jan 2018 Diversional Therapist
Hi Nori, glad to be of help. Thank you for your positive feedback.
Villan

24th Aug 2016 Recreational Activity Officer
I would like to extend my heartfelt gratitude to the Golden Carers website creator. We had a blast in our Mini-Olympic games for the past 2 weeks. Both our Residents and Staff enjoyed thouroughly the program we prepared. Residents and their immediate families were also involved. Most of the ideas presented in your website were excellent and have given us the opportunity to facilitate the activities which had provided friendly competitions among our Resident and Staff alike. We received lots of praises from our Resident, co-workers and the Management.

25th Aug 2016 Diversional Therapist
Thank you all for the feedback, it is very much appreciated. Best wishes!

26th Aug 2016
Thank you so much for your feedback Villan! I'm so happy to hear the Olympic activities worked so well for you!
NIU. S

23rd Jul 2016 Activities Co-ordinator
Thank you for these brilliant ideas.

13th Jul 2016 Lifestyle Assistant
Terrific ideas, and I have enough lead up time to plan!

6th Jul 2016 Freelance Activity Co-ordinator
Thankyou for all these wonderful ideas. August is going to be a great month for activities.
Tina

I love this site, there is always an idea, quiz or craft that I can use or modify for my programs.
After 35 years as an Activation Coordinator/Senior Facilitator, I am now semi-retired and running programs for individuals and small groups on Zoom (Mind Challenge/Theme Conversations & Your Story).

Love the forum idea and can see it being a real support to each other - wonderful to see the smiling faces, caring and positive attitudes that this field endangers!

Congratulations and thanks to the Golden Carers Team for a professional and well designed website that is internationally useful and user friendly!

I absolutely love this site. I find the resources and ideas invaluable in my role as a Recreational Activities Officer in a large Nursing Home. The abundance of ideas, quizzes, and printable forms are helping me help the residents find their inner “fun” which had previously been missing. THANK YOU from myself and the residents!!