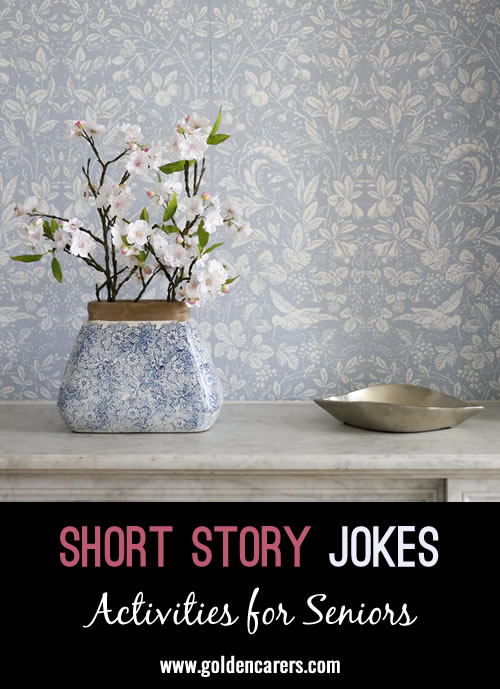 A mother visits her son for dinner. He lives with a female friend.

During the meal, she can't help but notice how pretty his roommate is.  She has long been suspicious of a relationship between the two and this has only made her more curious.

Over the course of the evening she watches the two interact and wonders if there is more between them. Reading his mother’s thought, her son volunteers,
“I know what you must be thinking, but I assure you, we are just roommates.”

A week later, his roommate comes to him saying,
“Ever since your mother came to dinner, I’ve been unable to find the silver plate. You don’t suppose your mother took it, do you?”

He replies:
“Well, I doubt it, but I’ll email her just to be sure!”

He sits down and writes to his mother:

Several days later, he receives an email response from his mother:

There was once a man who loved his money above anything else.

He loved it so much he decided to take his money to the afterlife with him.  He said to his wife: “Now, listen to me, when I die I want you to take all my money and place it by my side. This is my last wish and I want you to promise me you will do as I say.”

So his wife promised him with all her heart that when he died she would put all his money in the casket with him.

Well, one day he died.

His wife sat all in black at the funeral service next to a friend. When the ceremony finished, just as the undertakers got ready to close the casket, she exclaimed: “Wait a minute!”

She had a large box with her, which she took and placed in the casket.

Friend: “I hope you weren’t crazy enough to put all his money in there!”

Friend: “OH! For crying out loud! Every cent?”

Wife: “I sure did. I got the money all his money, put it into my account and wrote him a cheque.”

(She did keep his wishes… he didn’t say how!)

On the Sunday before Christmas the Rev Billy Graham was walking down Highland Street in North Carolina on his way to see a parishioner. However, he wanted to post a parcel urgently, so he asked a young boy where he could find the Post Office.

When the boy had directed him, Rev. Graham thanked him and said "If you come up to the Church this evening you can hear me telling everyone how to get to heaven."

The boy replied - "I think I'll give your sermon a miss. If you don't even know your way to the Post Office, how will you lead me to heaven?"

17th Jun 2019 Retired
Great funnies, Can we have some more please. Owen
RACHAEL

7th Jun 2019 Activities for Seniors
My people liked these stories a lot! Made them all laugh.

I LOVE! LOVE! LOVE! This website! Soooo much information to use in activities and with our Residents/Patients!

Your website is wonderful! I use it almost on a daily basis. My people LOVE the word ladders! They can't get enough of them. I will continue using it as long as I'm working as an activities person!